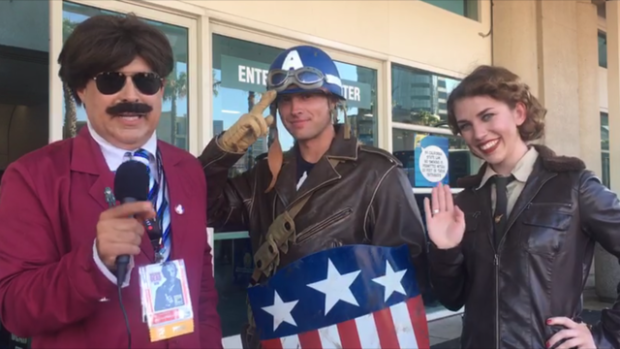 When Bob Dietrich, Kym Piekunka, and I descended on Comic Con this year, we weren’t sure what to cover. There were three of us and so much of Comic Con. In a crowd of over one hundred and thirty thousand people who were constantly entertained by things inside and outside the convention center, it was impossible to cover everything. We waited to go until Friday and we decided to set up a camera and tripod in the lobby of Hall C then just outside Hall C. While Bob donned his Ron Burgundy costume (he’s the fictional San Diego news anchor from the comedy, Anchorman and Anchorman 2), Kym lined up the shot, and I pulled cosplayers (people who dress up as characters or interpretations of characters) out of the crowd.

Before this, I was the only one of the three of us who had been to Comic Con (I attended for 3 decades) so I knew the characters and could give Bob a little information on the characters. Working together we interviewed over a dozen individuals and groups. As I talked to people, I heard great stories about patience (i.e. camping in line) leading to great successes and people being in the right place at the right time. Comic Con is a treasure trove of opportunities both expected and unexpected.

On Saturday Morning, Bob and I went through The Blade Runner 2049 experience sans Kym who was caught in the Gaslamp gridlock of the most heavily attended day of the Con. It’s a virtual reality ride that resolves into an immersive environment with actors adding to the reality of the surroundings. It would have been easy to get lost in that word (there were free noodles to eat so it wouldn’t have been out of the question) but we exited and met Kym to do something Bob and Kym had never done before – enter the exhibit hall.

As the one with the experience, I warned that there would be places where traffic would be difficult to navigate but I was hoping I’d be proven wrong. We were passing the DC Comics booth while they were introducing the stars of the Justice League for the most anticipated signing at Comic Con. Bob and Kym tried getting their cameras above the crowd to take photos while security yelled for the crowd to keep moving. We were close to the stage and to the line of people waiting for autographs which was a huge problem. I knew from experience that people farther out would start pushing in to see what was happening so we managed to fight the flow of people coming before clearing them and being able to move freely again while the crowd of people solidified behind us.

As we enjoyed the sights of the Comic Con, Kym in particular was struck by the different sizes of the booths and imagined that everything would have been more uniform. To those who haven’t been inside, booths like Warner Bros., are two story structures while the DC Comics’ booth was a single story but seemed to occupy more square footage and contained a stage. There were T-Shirt towers at different intervals with walls that were 2 stories high to make them more visible and display more of their product. There were booths like the X-Box booth that had realistic props that you could interact with. In X-Box’s case, it was an impressive, full scale dragon that people could take photos on to help them promote the upcoming “Middle Earth: Shadow of War” video game (available October 10th).

When people talk about Comic Con, they talk about the costumes. People wearing costumes are instant celebrities as they are stopped for photos often. And costumes are useful disguises for Daniel Radcliffe, Bryan Cranston, and Justin Timberlake who are among the many celebrities who have walked the exhibit hall taking photos with fans who didn’t know who was underneath the mask. If you’re a fan of anything, chances are you’ll be able to take a picture with someone dressed as a character you love.

There isn’t anywhere you can look without seeing someone in costume whether it’s accurate or entertaining like someone dressed as the new Wonder Woman or someone in a Boba Fett costume with red, white, and blue paint and a cape calling himself “Elvis Fett.” In fact, Bob Dietrich interviewed a woman dressed as Quicksilver from the X-Men films. Quicksilver is a man in the films but this doesn’t stop the woman from going as the characters. We also spotted a group of men dressed as Sailor Moon characters so gender is off the table as reason not to go as your favorite character Comic Con was, at one time, laid out more like Disneyland where different themes were together. The video game publishers and consoles were over here, the toy companies were over there, the comic book companies were right there, etc. Now they seem to be strewn throughout.

It might be that returning companies are getting their same spots while newer exhibitors are taking the places of those that didn’t return. It’s made for a slightly reduced experience because if you’re trying to avoid the thick crowds around movie studio booths with A-list Hollywood talent signings, you’re not stopping at the booth next door selling toys and comic books. Which probably means that booth is going to have a new tenant next year.

America’s largest comic book retailer, Mile High Comics pulled out of the Comic Con for the first time in 44 years. Their reason is more complex, but I’m going to give you the short version: they decided it wasn’t worth this expense or hassle to travel from Colorado to San Diego if the foot traffic around their booth wasn’t going to justify it. It’s hard to argue with that but, as a comic book fan, it’s also hard not to be drawn to all of these signings and panels.

The last few years I attended as a fan was not spent buying comic books but accumulating all of these experiences with celebrities. When I started going to Comic Con, there weren’t any online comic book retailers or eBay. Now when I want a current or back issue, I have a million options for how to get it from the comfort of my keyboard but I have no mechanism to shake Ben Affleck’s hand and thank him for the many years of entertainment from the same said keyboard. And if you can do all of that while dressed up like Batman, I bet it makes Ben’s (we’re on a first name basis) face light up and becomes ingrained in that fan’s mind forever.

That experience continues to be the focus for many people in the convention center. Even someone dressed like a celebrity, like Ron Burgundy, attracts a crowd.