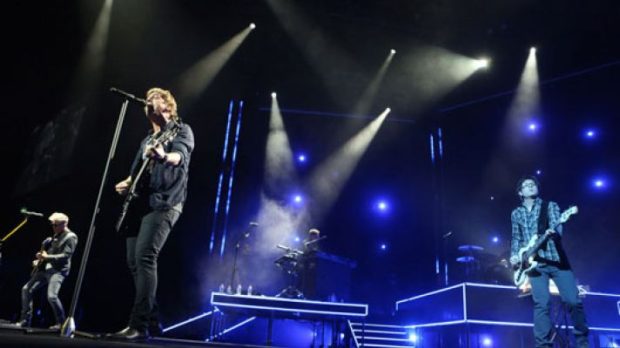 Last year, Rob Thomas opened for Counting Crows at the San Diego StateOpen Air Theater, and it was not a great experience. Although Rob Thomas was good, and played many of his Matchbox 20 hits as well ashis solo hits, the Counting Crows just don’t have enough hits, or a big enough following to headline this show.

This year I was surprised to see them basically repeat this tour. I mean, yes the whole band Matchbox 20 was now involved, but for the most part it seemed like it was going to be about the same show. But this was not the case, and this switch seemed to make all the difference.

The Counting Crows did a good job as an opening band. They played their 3 or 4 recognizable songs, and got the crowded excited and ready for the multi-platinum band Matchbox 20.

Matchbox 20 didn’t seem to have any new music to offer. They weren’t promoting new songs or anything like that. They were just playing the hits their fans love so much.

They opened their set with Real World, Girl Like That, and How Far We’ve Come. The show was not sold out, but the fans were going crazy. After all these years I have kinda forgot how many great original songs Matchbox 20 has written and recorded. As the night went on they played other hits like Bent, If You’re Gone, Back To Good and Unwell. They played 19 songs in all, with their big encore that included 3 A.M., Long Day and my personal favorite Bright Lights.

Bright Lights holds a very personal memory for me. It reminds me of a very special relationship I had, and a trip we took together to St. Bart’s in the French West Indies. We got in an argument during the trip, and she left. As I sat their lonely and missing her, I played this song. Songs have a way of locking in memories, making them easy to recall later. That could actually explain my deep love for music.

I want to give a special thanks to Rob Thomas and Matchbox 20 for keeping the music alive and touring just for the sake pleasing their fans. Respect!