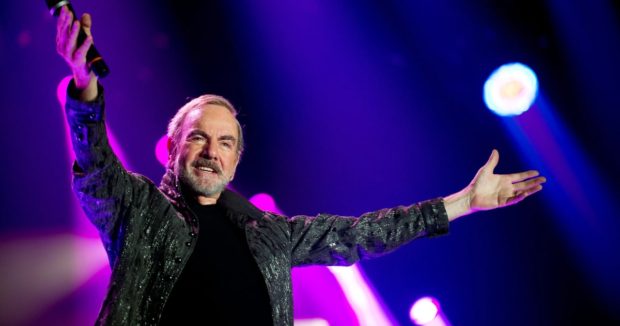 On August 8 music legend Neil Diamond stormed into San Diego and what a treat it was! Neil has been on the road for so long I had forgot how many songs I actually knew. Songs such as Forever In Blue Jeans and Play Me. It was such a great trip down memory lane.

I remember a more simple time when the music was deeper and more melodic, and songs of love and relationships we common. Neil Diamond was an icon, even back then, and his songs really captured the feeling of the times. Songs like Sweet Carolina and America were instant classics and even young people seed to know every word.

Neil Diamond created the kind of music you share with your family and pass down to the next generation like a family heirloom. The audience was a reflection of that sentiment, and although there were plenty of people in their 60’s and 70’s there, there were also several kids with their parents and grandparents sharing this experience.

It was certainly a night to remember. Neil sounded like he always had, in spite of being 80. A few cracks in his voice were easily forgivable as he performed over 20 songs. On stage he worked the crowded and moved side to middle to side and seemed to address each person as he sang. What a pro!

This type of music made me remember what music is really all about; generating emotion and capturing the feeling and memory of an era.

Thank you Neil for your outstanding career and all the memories your wonderful tunes have stirred up on my soul!