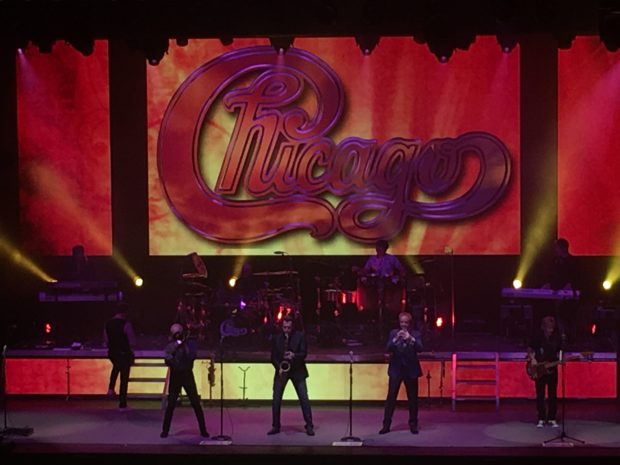 Review for Chicago at Pechanga Casino

By Bob DietrichFebruary 3, 2017 No Comments

The rock band Chicago performed at Pechanga Casino on February 3, 2017. The show featured three of the founding members of this group, Robert Lamm, Lee Loughnane, and James Pankow. While the fourth original band member, Walter Parazaider, was not present.

However the band itself certainly hasn’t missed a beat, with all of the current members sounding like a finely tuned machine.

The show was unique in that Chicago performed as a solo act, and delivered two hours plus of their bounty of hits. The group, which has been performing live every single year since his formation in February 1967, certainly showed that they still love to perform. And that’s right, Chicago is the celebrating 50 years of performing its unique blend of rock and jazz, or as Walter Parazaider once described the group as “a good little rock band with horns”.

And even though the most well-known member of the group, Peter Cetera, has not performed with the band in 30 years, on this evening the group definitely did not disappoint the sold-out audience at the Pechanga Casino.

Chicago started out the evening by playing many of their early hits, such as Does Anybody Really Know What Time It Is, Color My World, Beginning’s, and Saturday In The Park. The audience seemed to genuinely enjoy each of the group’s hits, and roared their approval throughout the evening. The concert rocked continuously without a break for more than two hours, with the group displaying great energy and enthusiasm for their music.

Chicago capped off their performance with a three song encore highlighted by their classic hit “25 or 6 to 4”. Lastly, the members of the band came back on stage and appeared in their trademark chorus line lineup, as the crowd showered the members with a standing ovation.

Yes, even after 50 years of live shows, Chicago remains “a great little rock band with horns”!

By Calvin Goetz and Bob Dietrich