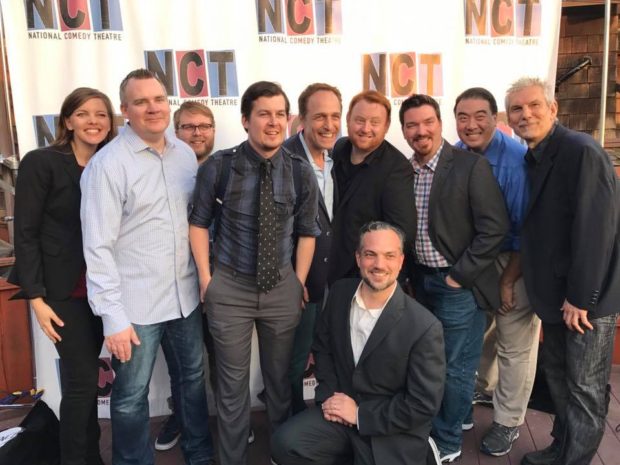 On the day of their five thousandth show, March 18th, 2017, the Mayor’s Office in the city of San Diego declared it “National Comedy Theatre Day.” For almost 2 decades, the National Comedy Theatre has been the premiere place San Diegans go to watch improv comedy and take improv classes. It is the home of the longest running show in San Diego’s history and it’s “Sunday Company” (a group of performers who perform on – you guessed it – Sundays) is the second longest running show in San Diego.

To celebrate their milestone, there was a reception before Saturday night’s show where there was live music, wine & cheese, and a photobooth. The show had sold out a few days before and the crowd was excited to spend time with the cast. For their part, the cast took photos together, talked to the crowd, and had a great time. Then, an assistant to the mayor (who is also on the Sunday Company) presented the founder, Gary Kramer, with a framed proclamation of “National Comedy Theatre Day.”

Then the doors opened and the crowd flowed in for the five thousandth time. But it was a different crowd and as the ref came on stage to warm up the crowd, he asked them who was visiting for the first time and only six people raised their hands. It was a crowd filled with NCT family and fans. There were a few of us in the audience who were even alumni of the improv classes who had found our way onto one of NCT’s house teams (full disclosure: I just made a team but haven’t performed with them yet).

After about a hundred minutes of non-stop laughter, instead of preparing for another performance, the Mainstage cast went to a nearby wine bar, 57 Degrees, to cut cake and party with cast members old and new as well as family and friends. It was a great way to celebrate such a significant milestone and a great opportunity for the fans to ask all about improv.

What makes an NCT improv performance so amazing is that the audience understands that they’re seeing something made up on the spot and that everything that happens will never happen again. The theatre sits 103 audience members so it’s large enough that the crowd makes a lot of noise but the farthest seat is about 25 feet away so it’s intimate no matter where you sit. For their Friday and Saturday night shows, tickets are $18 (or $14 for military, students, and seniors with ID). Get tickets and more information on all of their shows and classes at nationalcomedy.com.

They also have locations in Arizona and New York and they’re willing to travel to wherever you are. They’ve been around since 1999 and if their current success is any indication, they’ll be here for another five thousand shows.