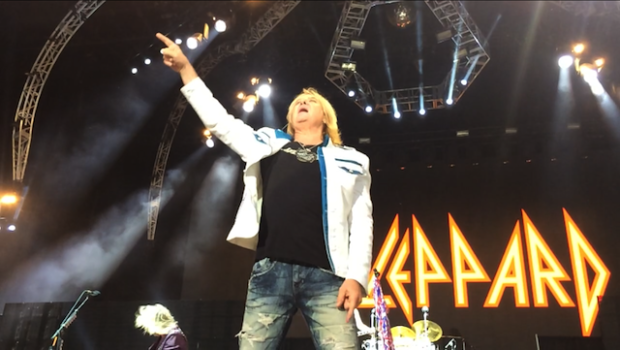 I remember growing up watching MTV and seen Def Leppard dominate the airwaves. They were so good, so fun, and so representative of the 1980s. With songs like Rock of Ages and Pour Some Sugar On Me, Def Leppard cast themselves as legends in rock history.

Now they’re back, as many 1980s bands are, on a retro tour with fellow 1980s bands Poison and Tesla. These guys attract a very interesting crowd because they each have their own fans, and the fans a just different enough to stand out. Tesla lead off the concert, and their fans, who are a little more hard rock than the rest, gave a raging cheer as Tesla played their most popular songs.

Poison was next, and had even more fans in attendance than Tesla on this night. The Poison fans seem to be a bit more flamboyant, and often dress in the 80’s garb to show their support for the band. It was a bit muggy for a June evening, and the seats were filling up as the night closed in, and the 9 o’clock start time for Def Leppard grew closer.

As Def Leppard took the stage, I remembered that the drummer, Rick Allen, had lost an arm in a car accident in 1984. And sure enough, he was still sitting firmly in back of his drum set inspirationally keeping time with the music. Simply amazing!

You know, after all these years, I kind of expected Def Leppard to miss a few beats, and not sound quite as good as they used to, but that was not the case. Joe Elliott, Def Leppard’s lead singer, was fantastic! His voice is still solid and he certainly knows how to excite an audience.

I’m not sure how I missed it through all these years, but I never realized that Joe Elliot is English. Born in England in 1959, he was part of the British invasion of the 1980s. I guess Def Leppard always seemed American to me.

What’s funny about these retro bands is that sometimes you forget how many hits they actually had until you see them again in concert. It seem like every song was a hit, and Def Leppard perform them like true professionals.

As Joe Elliott took time between songs to speak to the crowd, I was reminded about a story professional speaker James Malinchak told me about working with Joe and the band to help them keep their connection to their fans. I guess even the biggest superstars can use coaching from a great speaker like James Malinchak.

As we all get older we begin to realize that there will be a day soon when we can’t see bands like Def Leppard anymore. I’m so grateful I had the opportunity to see them now. If you get a chance, check them out online, find out their tour dates, and see them while they’re still touring with bands like Poison and Tesla. These are fun times that will eventually end, and you’ll want to see them while you still have the chance!

By Bob Dietrich and Brandy Pamintuan