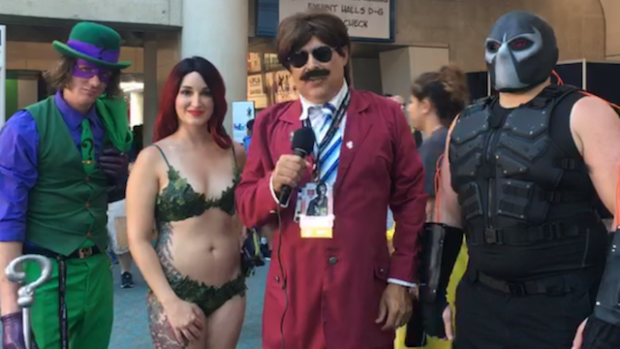 In 1992, Image Comics exploded into existence. At its core was 7 of the most popular artists in the comic book industry. The idea was that artists could own the things they created and many of them created their own companies which would create the books then Image Comics would publish them. One of these companies was WildStorm Comics formed by Jim Lee. Jim Lee, whose popularity has never dimmed, was the artist behind the 1991 spin-off of the Uncanny X-men simply titled, X-Men. X-Men #1 remains the best-selling comic book of all time according to Guinness World Records. Eventually he sold WildStorm Comics to DC Comics became its co-Publisher.

In the nineties, comic book creators were rock stars at San Diego Comic Con, drawing large crowds that waited in line for hours and Saturday July 22nd, it felt like the nineties again. Even though the WildStorm 25th Anniversary Reunion didn’t start until 7:30pm, there were already over 30 people in line at the San Diego Art Gallery in Liberty Station when I arrived at 5:30pm.

The Facebook event said there would be a commemorative item at the signing but we didn’t know what that might be. On Twitter, Jim Lee had teased some rough pencils of Deathblow the anniversary but I still didn’t know if those pencils would be in a comic book, a hardcover book, a poster, or a print. All I knew was that I was likely to buy one and be grateful that I was getting to enjoy one last taste of a comic book company I was a big fan of…at least until the next reunion.

As it neared, someone came out to talk about the commemorative comic book that the creators would all be signing and laying out the limits on signing items. You were allowed 3 signatures per person and the commemorative item didn’t count. That was great news for the line considering there were 22 people to get signatures from: Jim Lee, Whilce Portacio, J. Scott Campbell, Scott Williams, Carlos D’Anda, Lee Bermejo, Alex Garner, David Baron, Eddie Nunez, Jason Johnson, Jeff Mariotte, Livio Ramondelli, Mark Irwin, Mat Broome, Richard Friend, Ryan Benjamin, Ryan Odagawa, Sandra Hope, Shannon Eric Denton, Trevor Scott, Francisco Herrera, and Humberto Ramos!

The line was slow moving but seeing all of these folks in one place together isn’t something I would have expected even at the Comic Con so it was a once in a lifetime opportunity. They were clear that the commemorative item would only ever be offered that night and never again. It was a great experience, just one of the many that the San Diego Art Gallery has hosted. For those who haven’t found this gem in Liberty Station, it is located on the first floor of the comic book company, IDW Publishing and across the lawn from comic book store, Comickaze.