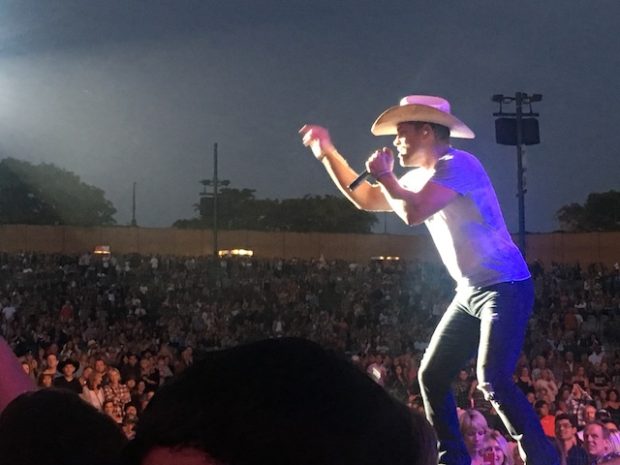 When Luke stepped on the stage you would have thought it was Brad Paisley himself, based on the crowds reaction. Lune Bryan is super high-energy and really worked the crowd well as he got them involved in most of his songs with this smooth country style.

This was definitely a show for all ages, although the ladies dominated the open air venue in Chula Vista. Everyone was super excited for the main attraction that was about to begin, and they went wild as Brad Paisley stepped on the stage. His onstage background graphics were fun to watch, and included everything from South Park excerpts to psychedelic patterns. It reminded me a lot of a Toby Keith concert.

I have noticed a lot of bands have paid tribute to Prince this year, and so did Brad Paisley, as he open the show with a combination of his own song “Last Time For Everything” and Prince’s song “Purple Rain.”

The show had a mixture of fast-paced country songs and soft ballads that Brad is so well-known for. Most of the crowd stayed till the very end has he close the show with his hit song “Alcohol.”

This is the third time I’ve seen a Brad Paisley show, and it was just as good as the rest. Brad is a solid performer, and the shows are always top notch. If you get a chance, grab a couple tickets to see Brad Paisley next time you see him in concert. You won’t be disappointed.

By Bob Dietrich and Jeremy Johnston