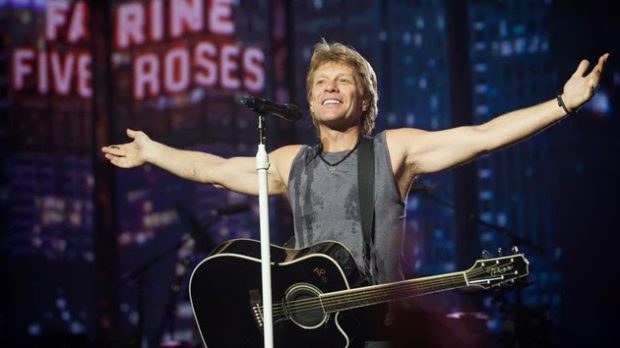 Bon Jovi is Wanted: and Very Much Alive

By Bob DietrichMarch 7, 2017 No Comments

Bon Jovi was one of the biggest acts of the 1980s, and you really haven’t seen much of them since then, until recently. Jon Bon Jovi has appeared on several commercials, as if he were hinting that he might be mounting a comeback. I traveled all the way to The Forum in Inglewood to capture this
moment with John Bon Jovi. The crowd was electric and eclectic as I entered the infamous Forum. I expected this to be a real cougar convention, but I was shocked by the diversity of people in attendance. You had single moms there with their children, couples young and old, and every range in between.

As the opening band blared in the background, it seemed as though their purpose was to give people time to wait in the long lines for their food and alcohol. Although they sounded very good, I can’t tell you their name, but they served as a worthy placeholder as almost everyone was in the vending corridor gearing up for the concert. The break between bands seemed exceeding long. Probably because this event was on a Wednesday night. Most people were coming from work, and promoters were likely allowing people time to get dinner and drinks before John Bon Jovi started his 24 song set.

Bon Jovi kicked off this epic evening with his new song This House is Not For Sale, and the crowd went crazy as he transitioned into his legendary hit You Give Love A Bad Name. Jon Bon Jovi is a true professional, and knows how to work a full arena. He kept people engaged, even through his new songs, which is very hard to do. Bon Jovi sounded like their original selves, and didn’t miss a beat, and although a third of their songs were new, everyone was on their feet having a great time! At the end of the concert, Bon Jovi performed two separate encores, wrapping everything up with Wanted Dead or Alive, and Livin’ on a Prayer. When it was all over the crowd’s cheer kept Jon and the band on stage. The crowd just didn’t want the night to end, and they wouldn’t let them go.

This was a fun rock concert in true 80’s style. People were dressed up in 80 garb, the crowd rushed the stage, and Jon Bon Jovi was moving like he was 25 again. This blast from the past is already the highlight of this young 2017 concert season.