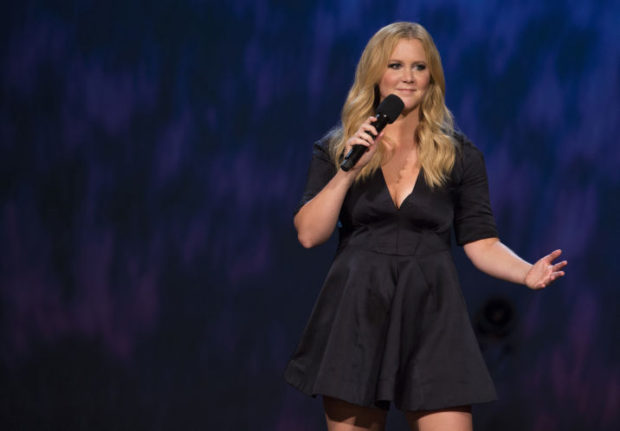 By Bob DietrichDecember 30, 2016 No Comments

Unless you’ve been living in a cave you’ve at least heard of Amy Schumer. And what you’ve heard is true – she is funny, fearless, and as vulgar as you think she is. So when my friends and I heard she was performing at the Valley View Casino Center in my hometown of San Diego on December 3rd, we purchased our tickets immediately.

We arrived during the opening act. I’m an avid listener of Pandora’s comedy channels and recognized the comedian immediately (though I can’t recall his name now) because he was doing a routine I’d heard. He was great on Pandora and even better in person. I wish I’d caught his entire act.

Next, of course, came Amy Schumer. The stage was raised about 10 feet off the floor so she was easier for the audience to see. Her set was a smart combination of the sexual observations she’s known for mixed with some ‘slice of life’ bits concerning some of the celebrities she’s had run ins with since conquering the comedy world. And of course she did the anti-Trump material that made some of the audience at one of her shows leave. Fortunately California isn’t just a blue state, it’s pretty tolerant of different opinions.

I have performed stand up comedy locally, one show featured Dat Phan, the first winner of “Last Comic Standing” but that doesn’t give me any special insight into the hard work and dedication necessary to get to Amy Schumer’s level. I does give me insight into who comedians are though: they’re self aware storytellers. Over a year prior to the performance, there was a shooting at her film “Trainwreck” that deeply affected her. Two of her fans were killed in that shooting and she immediately educated herself on both sides of the gun control debate, joining her cousin, Senator Chuck Schumer, as an advocate for gun control.

She did a bit that covered some of the insane gun control laws that exist. The more we laughed the more I wondered who created these odd laws.
The staff of Valley View Casino Center were very quick to shut people down who were trying to video the event. Maybe it was because of this vigilance at her shows that Amy seemed at ease with the audience… though it was probably her hundreds of performances that we can credit that to. Either way, a good comedian makes the jokes seem like a conversation between the performer and the audience so I’m not sure how much was off the cuff and how much was planned but it seemed like a blending of the two. In any case, she’s got plenty of material for her new stand-up special, “The Leather Special” on Netflix. As of this writing, the premiere of that special is in two days but I’ve no doubt I’ll be treated to familiar material.

Amy Schumer’s performance was full of the sexual talk I was prepared for. What I wasn’t prepared for was her well-informed and hilarious take on gun control. She’s using her humor to bring awareness to a serious issue and talk about her sex life. It was an event worth attending and I hope you’ll get to see her when she comes through your city.