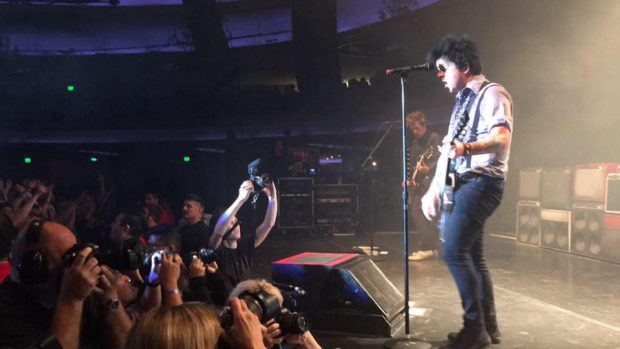 By Bob DietrichApril 3, 2017 No Comments

The year was 1994. Grunge was becoming passé and teenagers like myself began looking for a new outlet to vent our frustrations. Then out of nowhere, and no pun intended, the album “Dookie” from Green Day dropped on Middle Class American Youth. With hits like “Longview”, “Basket Case”, and “When I Come Around” suddenly the youth of America found what we were searching for. Green Day became household names from those hits and became radio and MTV regulars. That year they made a surprise stop at Woodstock 94’ and is remembered for the infamous mud fight that they helped ensued. To think that after twenty three years of playing together and starting families, that this trio would settle down. That this band of punks would lose their edge. Far from it.

Green Day invaded Wells Fargo Arena on Monday April 3, 2017, and just like all their other shows, were impressive. The opening band, Against Me, was good, but I was excited like everyone else to see Green Day. For me, I did not know how I would take it? Would these guys get me moving? Would I still feel the same way that I did at age nineteen listening to these guys in my room? Would they still rock? The answer to all these questions is HECK YEAH! A man in a bunny suit who is rumored to be the drummer Tre Cool was first up getting the crowd railed up. Then the curtain dropped and Billie Joe and Mike Dirnt came on stage, with Tre Cool joining his bandmates. They started the set with a song entitled “Know Your Enemy”, and that was that. A young fan is onstage with the band and just like I remember from the 90’s stage dives into the crowd.

“Tonight brothers and sisters, tonight is about having a…..great time,” Billie Joe said to the audience. “It’s about humanity. No more lies. No more conspiracies. No more corruption. We’ll all have each other’s back in Iowa.” I have to add to this. For the 3 hour plus set, and yes I said 3 hours, I had a smile on my face. And so did everyone in attendance! Bob and I bumped into a girl who attended the Green Day show in Los Angeles and her enthusiasm was contagious. The show was exciting and I thought, if we acted like this on a regular basis, maybe the world would be OK. Instead of worrying about our health, finances, mortgages and an endless cycle of debt. Green Day took me back in time to where I had no worries. “Singing together and dancing together that’s what we should be doing.” Armstrong tells the excited fans. “I don’t want to talk about war. I want to talk about love and singing and dancing.” Maybe they should be ambassadors of peace.

Green Day is mainly known for getting in touch with their fans, and this evening was not exception. They brought young musicians on stage to perform to play drums and lead guitar for their classic song “Knowledge.” Seeing these kids playing with the band added to the fun that helps me to believe that anything is possible. Since Green Day has been playing together for nearly 30 years, they have added musicians to their traveling circus. An accordion/piano player, a guy on saxophone, and a rhythm guitar player are now in the mix. However, these are recent editions. They were not part of the band in the 90’s which I feel was their heyday. They even played one of my favorite songs, “She”. That song and “Welcome to Paradise” were staples in a punk cover band that I used to perform with. Warm memories flooded my mind and Billie Joe closed the show with the second encore by performing on acoustic “Good Riddance (Time of Your Life)” and the three band members all took a bow with smiles on their faces. I too had a smile on my face and was so happy that I had the privilege of attending a fantastic show that helped bring me back to my youth. Thank you Green Day, thank you.

By Brian Webb and Bob Dietrich

Brian Webb is a freelance author with a just released e-book entitled “Chasing the Miracle”, documenting his journey around the country during the Great Recession. The book is an e-book of cell phone pictures as he began discovering things within this country and within himself. You can purchase the e-book on the Amazon link below. He currently resides in Des Moines, Iowa.
https://www.amazon.com/Brian-Webb/e/B06XWD7P9S/ref=sr_ntt_srch_lnk_1?qid=1491489534&sr=8-1http://mybruisedbrain.com/because-i-can/ http://thisibelieve.org/essay/50569/