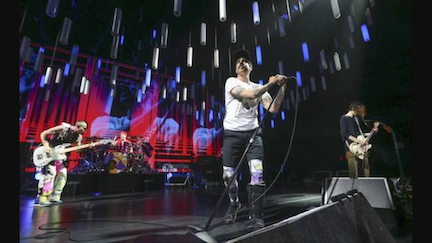 The Chili Peppers Are Red Hot in San Diego

As fate would have it, RHCP lead singer Anthony Kiedis came down with the flu and the Chili Peppers had to cancel several tour dates. Normally this would have been bad news, but for some fans it was great because it allowed them to see Bon Jovi as scheduled, and the Red Hot Chili Peppers at a later date, provided they rescheduled.

About 1 week after the cancellation, the promoters announced the rescheduled date of March 21, providing a perfect storm for fans of both bands.

Believe it or not, tickets for the Chili Peppers were still available the day of the concert, as the promoters opened up some extra sections for last minute fans. It was also scheduled to rain that night, but the rain never came and the stage was set for a real rager!

The crowd was ready to rock as the Chilis stepped out on stage and opened with a medley they call their “Intro Jam.” After a few songs Flea, who seemed to the the spokesman for the band, gave a big hello to San Diego and talked about how much he loved coming here. “I love your city San Diego! There’s so much to do here. I especially love surfing in PB.” Then Flea gave a shout out to the troops stationed here in San Diego as they started to play The Zephyr Song.

The Chili Peppers only played 18 songs with one encore, but the crowd seemed satisfied as they rushed the stage, cheered on the band and beckoned their encore. The band finished their set with Goodbye Angels and Give It Away as they concluded a high energy evening, and once again the Red Hot Chili Peppers demonstrated why they sell out arenas in every city the visit.